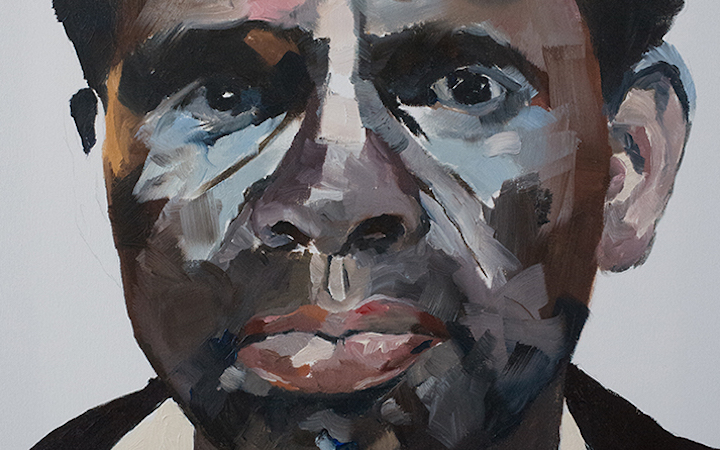 There’s a story in each of these portraits of fighters, underdogs and champions.

“I found an old photo of boxer Kid Lavigne,” says artist Harley Oliver.” In 1894 he killed a man in the ring. By beating him to death, he took on that man’s title - US Lightweight Champion. I looked again at the photo . There’s none of that story in his face. I thought I’d try and expand that image as a portrait on canvas“

That idea developed into the series ‘Hitters, Grapplers & Strongmen’, ten paintings showing at the Stanley Street Gallery from February 28th to 24th March.

“A huge man, still a legend in Estonia. Indestructible as a wrestler, he got caught up in fighting during the Russian revolution. He survived that but died a few months later from Typhoid.”

Two Australians are in the series; Max Carlos , who was tipped to win a medal in the ’56 Olympics and Max Stuart, an aboriginal tent boxer who was arrested for the brutal murder of a nine year old girl from Ceduna. Even though he spoke hardly a word of English , the police produced a detailed confession. He maintained he was given a beating by police. Sentenced to hang , his case caused great public concern. Led by Rupert Murdoch, then publisher of the Adelaide Times the court was persuaded to commute the sentence to life in prison.